Korea is currently the hot-bed for all the newest, most innovative beauty trends and treatments.

The latest and greatest developments in the beauty world all are stemming from Korea, which is an obvious indication of the culture’s insatiable interest for aesthetics.

For roughly the past decade, Korea has been fixated on a beauty ideal that resembles a child-like countenance.

Popular models feature a similar look with child-like proportions; full cheeks, clear, unblemished skin, big eyes, and a tapered chin. These beautiful girls are ambigious age-wise, they could be 13 years old, or they could be 30.

The desire for a child-look appearance has gone so far as to begin a behavioural shift, women and girls are actually encouraged to behave in cute and childlike ways. There is a designated word for this, K-pop, K-dramas and Korean variety shows highlight people doing their best “aegyo” (baby) acts.

A representation of the current Koren beauty ideal. (image from http://beautytsalon.blogspot.com/2013/10/natural-look-make-up-using-korean.html)

Korean children are not immune, nor protected from, this intense focus on beauty.

You can find YouTube videos of young toddlers getting their eyelashes curled, and their hair dyed and permed. For those lucky enough to attend, you can witness first-hand young children dressed up, made up, with their hair styled to perfection, gracing the seats at Seoul Fashion Week.

But children have always had a fascination with what their parents are doing. Whether it’s something as mundane as mowing the lawn or playing dress-up, copy-cat / role-playing behaviour in children is normal and helps them develop their sense of identity and personality. At these tender stages, parental guidance is vital to help maintain perspective about what is truly important and special about a child. Surely no one wants a generation of babies growing up thinking that the only thing that matters about them is how they look?

The facts remain though, interest in children and teens’ skincare make-up and skincare is on the rise.

In South Korea, brands like The Face Shop saw cosmetics sales among teenagers aged 13 to 19 double in 2014. A Korean consumer rights group reported in 2016 that 42.7% of elementary-school girls surveyed had used cosmetics before, according to news site Quartz.

Yoon Kyung-won, a Seoul-based mother with two children aged nine and six, says that while she began using make-up in high school, she draws the line at younger than middle school.

“Until middle school, I don’t want my kids wearing make-up, but if all their friends are doing it, it might be tough to avoid … When I was a high school student, [cosmetics brand] Etude House had just launched and it was the first brand for high schoolers and teens. Me and my friends bought their powder to ‘brighten’ up our faces.”

In Korea, while girls generally enjoy experimenting with make-up, a lot of parents and schools frown upon it, Yoon says.

“These days, lots of high school students do their eye make-up and eyebrows … My daughter’s cousin is 14 and she’s doing her eye make-up, lip colour and hair … She spends a lot of time trying to make herself prettier … but lots of mothers don’t like when their children do this because they worry that once they care about appearance, they won’t do their homework.”

Yoon adds that children in South Korea also internalize the images they see on social media, and assume the perfect, photoshopped models are the physical-standards against which everyone is measure. “When I was in high school, some of my friends got plastic surgery as young as age 16. They got their eyes and nose done! At the time, [I felt jealous] and wanted to become prettier too … after surgery my friends seemed more happy and confident.”

Alexa Bui, a Hong Kong-based make-up artist and mother of two, says she was allowed to experiment with cosmetics from a young age. “I was allowed to [apply] lipstick and paint my toes as a child but I was never allowed to leave the home with them on until I was in high school, and I feel like that’s a fair house rule for us,” she says.

Bui says children can experiment with self-expression via make-up, though this should be limited to certain items only. “For middle school children, I think it’s fun to play around with lipgloss and nail polish. [But] I personally draw the line at foundation because at that age their skin is still baby soft and perfect, so why would you cover it?”

Ultimately, Bui says, parents should be free to decide what is best for their children, as long as it doesn’t have any long-term negative effects.

“I got my first perm at the age of six, so maybe that’s why [I think that]!” Bui says. “That being said, my kids won’t be getting their hair permed or permanently coloured until they reach double digits, but a little bit of hair chalk that washes out never hurt anyone if it’s during the school holidays. To me, their appearance is not the be-all and end-all, but simply another part of them.”

How do you combat group-think of “pretty” = success + happiness?

Reflecting the country’s position as one of the world’s top beauty and plastic-surgery hubs, South Korean society is accustomed to the immense cultural pressure to be physically attractive. It is a country where beauty is viewed as proof of one’s financial success, and thought to be part of the requisite formula for achieving happiness.

Similar trends also exist in China, where HALF of the cosmetic-surgery market is made up of patients still in junior high school or college, according to a 2017 report published by Global Times.

In Korea, Yoon says these standards are imposed from an early age. “Even though my daughter is only in the second grade, some of her friends will turn to her and say, ‘You’re so pretty, I wish I had a thinner face [like you].’” 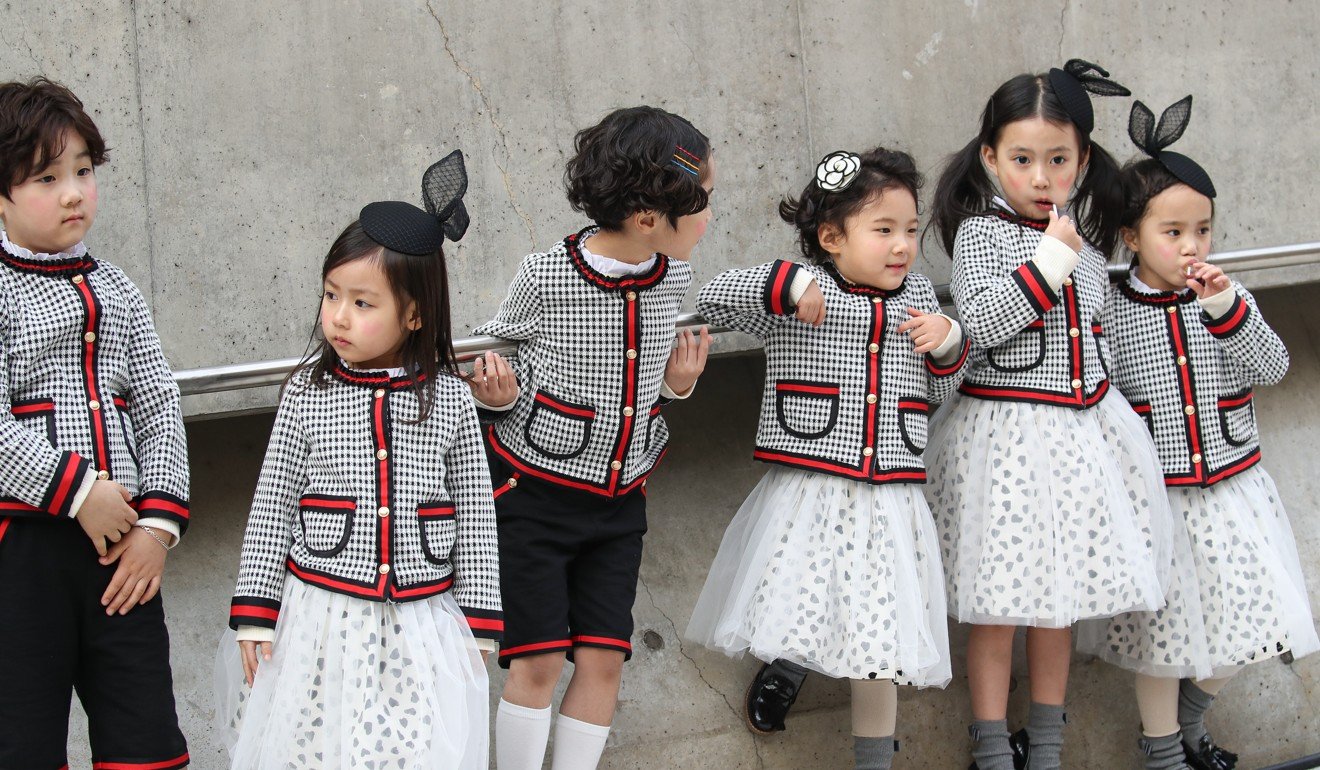 In the end, every child is fascinated by how their parents behave.

It makes total sense that children who see their parents obsessing over appearance, will also obsess over appearance. This is a vicious cycle that shows no sign of stopping. Although a wonderful thing for plastic surgeons and cosmetic companies, this seems inescapably damaging to the current crop of Korean humans. On the one hand, if little changes here and there make someone feel better about themselves, great! But appearance should never be so important that a person bases their entire self-worth on how they look.